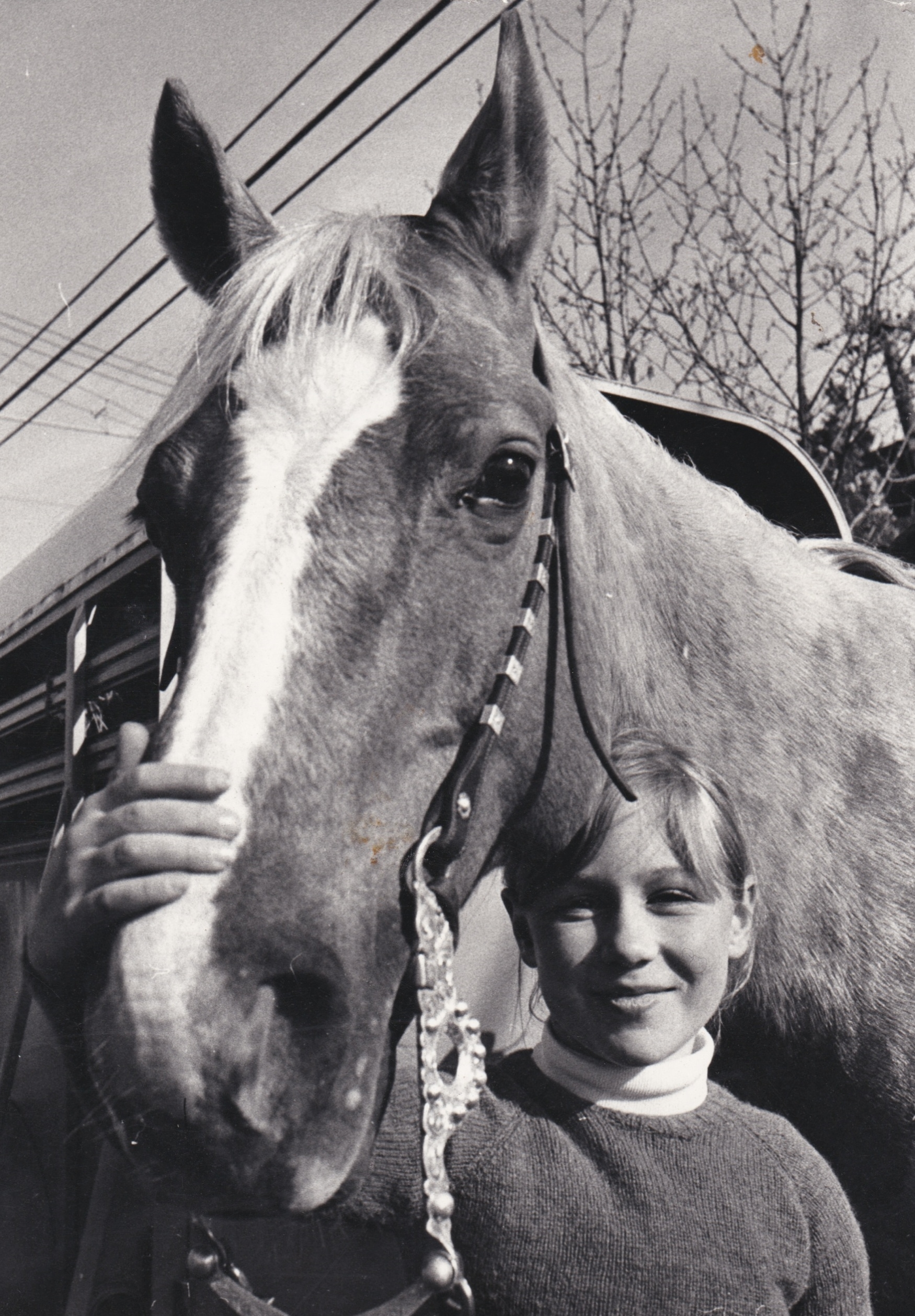 Allison Everett (White) likely learned to ride before she could walk.  Her parents, Doug (2011 BC Cowboy Hall of Fame inductee) and Dianne White, had a family that focussed on horses so Allison and her sister Kirsty grew up with it in their blood.  In fact Allison, at 3 years old, showed a young horse at the PNE.  She grew up in Maple Ridge riding both English and Western.  Her family moved to 150 Mile House in 1974 where they raised roping stock and trained horses.  The two girls started roping and barrel racing.  With the loss of their mother when Allison was 14 the girls had to travel the rodeo circuit and train their own horses while dad looked after their ranch.  After high school Allison attended Central Rocky Mountain Region College, in Casper Wyoming where she was very successful in both education and rodeo.  Now a teacher (librarian) back in Williams Lake, Allison continues to rodeo, train horses, raise roping stock, put on clinics, and give lessons.  She offers her arena to anyone wanting to learn.  Allison is, or has been, a volunteer and/or director for numerous local organizations like BC Rodeo Association, BC High School Rodeo, Little Britches Rodeo, Williams Lake Indoor Rodeo Association, Williams Lake Stampede Queens Committee and the Williams Lake Stampede, to name a few.  She sits on the BC Cowboy Hall of Fame selection committee and is also committed to help local contestants running for Miss Rodeo Canada.  Allison has won around 52 saddles, a truck, and numerous buckles and trophies.  She still competes in team roping, breakaway roping, barrel racing, and is a hazer for steer wrestlers. Allison is an inspiration to others and is continually giving back to the sport of rodeo.

Paul “Buck” Mammel was born in 1920 in Romania. The family immigrated to Canada in 1929 and settled in Alberta. In 1936 they moved to Sardis and became dairy farmers. In 1939 Buck left home and headed to Ashcroft for a job at the Ashcroft Ranch and then moved on to Williams Lake. His first cowboy job was at Chilco Ranch in 1939 and in 1940 he went to Alkali Lake Ranch. From 1941 to 1943 Paul was in the army but returned to Alkali Lake Ranch. Over the next couple of years he worked at various ranches including the Gang and Becher’s.  Buck’s time on the rodeo circuit earned him the reputation as a good all-around cowboy. He rode in the Williams Lake Stampede in saddle bronc and in 1946 he won all-around cowboy at the Riske Creek Stampede. He also competed at the Calgary Stampede as an outrider for the Alkali Lake chuckwagon team.  In the early 1950s Buck went to work in the logging industry to earn money for his own ranch. In 1959 he and Margaret purchased the Pioneer Ranch at Miocene and in 1969 they purchased the Poole Ranch at Rose Lake. In 1973 Buck and his wife sold the Pioneer Ranch known for a quality commercial Angus herd. They sired many grand champions at shows including 4-H. In semi-retirement Paul began purchasing steers in the spring and selling in the fall. He was offered a job by Canada Packers to be their head buyer in BC, and Douglas Lake Ranch offered him a position as head cowboss, all of which he turned down as he loved his life in the Cariboo. He was involved in the Rose Lake Miocene 4-H Club as well as the community. He was involved with the Cariboo Chilcotin Rodeo Association and sponsored best all-around cowboy. He was President of the Cariboo Cattlemen’s Association and a director for the BC Cattlemen’s Association and was a director of the Co-op Association.  Buck died in 1996. He was known as a man who held the spirit and life of the cowboy. His word and handshake were his honour. 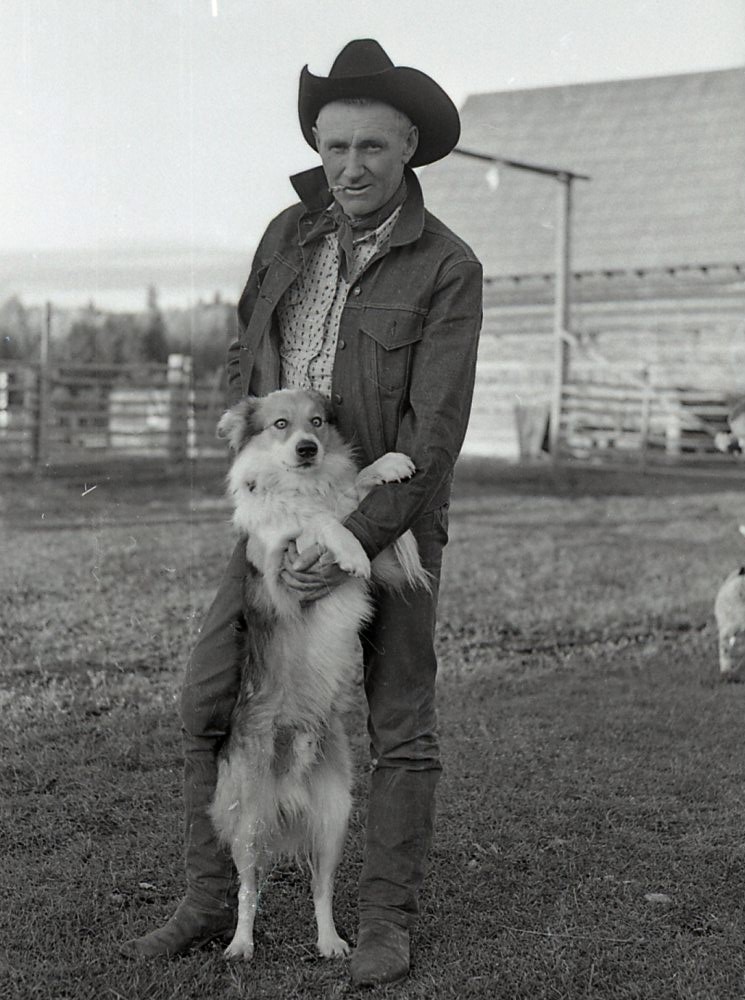 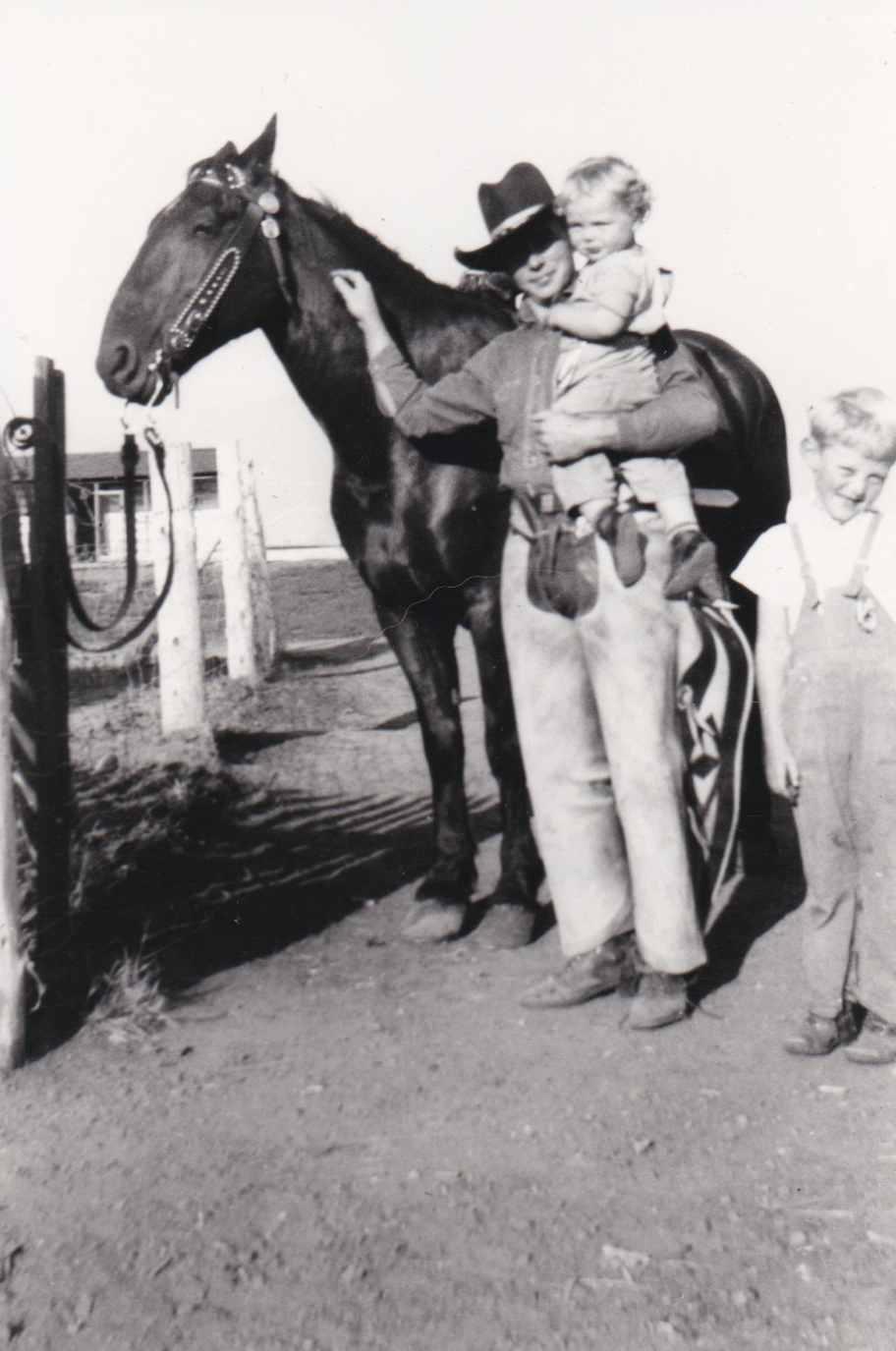 Frank Langman Armes was born in Vancouver in 1908.  His schooling was in bookkeeping and he planned on being a ship purser, but his father took him out of school at 15 to work on the J S Place Ranch that he had purchased in Dog Creek.  A train ride landed him in Ashcroft at -30 and horse and sleigh took him the rest of the way.  The next few years were spent learning to ride and work cattle.  In 1931 he married Doreen Pollitt and they had four children; Bob, Gordon, Dorothy and Allan.  In 1936 Colonel Spencer asked Frank to manage the Meason Ranch at Little Dog Creek and the Gaspard Ranch in the Dog Creek Valley … this was the start of the Diamond S Ranch. One thousand head of cattle were purchased in Alberta and shipped to Mission where Frank and two other cowboys met them, shipped them by train to Ashcroft, then drove them to Little Dog Creek.   Frank now had to develop more hay land and dams for irrigation all with horses. Their first tractor was purchased when the Ford 9N came out (1939) and soon they increased their cattle number to 3000 head. Frank improved the calf crop, brought in Hereford bulls from England and hired more cowboys to better manage the grazing.  They added the 500 head Pigeon Ranch. In 1949, when the Colonel turned the management over to his daughter, Frank took a job as manager of the 2000 head Nicola Stock Farm until it was leased.   At this point the family moved to Williams Lake and started Armes Brothers Agencies selling farm equipment and supplies.  Frank had fond memories of his ranching days and spoke fondly of the First Nations people that were the majority of his work crew.  He enjoyed a great journey with his bride of 70 years by his side.   Frank passed away in 2002.

Hugh Peel Lane Bayliff immigrated from England when he was only 18, working first for the Cornwall brothers in Ashcroft and then at Cherry Creek Ranch. He was delivering horses in the Chilcotin when he got his first glimpse of the vast Chilcotin and its autumn splendor that ignited his passion for the Chilcotin area. In 1886 he began the historic cattle ranch called the Chilcancoh Ranch starting with 160 acres overlooking the Chilcotin River. In those days, everything was done by hand and with horses. In the winter, animals were mainly pastured in the river valley, and in swamp meadows, with a little extra hay fed in the deepest of winter.

Hugh went to England in 1891 and brought home his bride, Gertrude Tyndle who was a skilled rider. She rode side-saddle to help round up cattle, ride the range, and enjoyed competing in local horse races at Becher’s Prairie and Riske Creek, often bringing home trophies. Gertrude had some medical knowledge and helped ranching and native neighbours in times of need.

Their only son, Gabriel (Gay), returned to the ranch after serving in WW1, and together the two generations built the Big House on the ranch, which they still live in today. Gay married Dorothy Dyson from Kent, England, moved into the new house and they settled down to continue ranching. Dorothy was an excellent rider and helped with cattle, and fed large crews of as many as 16 workers, very hungry after haying by hand and with horses and wagons. Gay and Dorothy had two sons, Timothy (Tim) and Anthony (Tony). After serving in WW2, Timothy came home to help with the ranch, while Tony took over the neighbouring ranch owned by old friends, the Newtons.

Tim met Dorothy Merle Glenny, the Red Cross Outpost nurse, at Alexis Creek when he was slightly injured, and they were married in the Big House in 1954. Following the tradition of earlier Bayliff wives, Merle pitched in to help with every aspect of the ranch. She rode, drove tractors, helped with haying, and, of course, cooked for the hay crews, as well as keeping all the ranch books. They had three children: Elizabeth who now works in Williams Lake, Hugh who recently passed away, and James who built up a logging business but died in an accident in 1994. Hugh’s wife Helen, and children are currently running the ranch today in its second century.

During Tim’s lifetime he was passionately involved with the BC Cattlemen’s Association and the BC Grassland Conservation Society. His love of and knowledge about grasslands was great, and he was involved in many research projects that investigated, monitored and evaluated grassland health on the ranch and its range lands, a passion which he passed along to his son Hugh, daughter-in-law Hellen and family.

The legacy of the three previous generations’ struggles, hardships, successes and innovation is being carried on, as family members continue to work to improve the health and sustainability of the environment, ranch, and family today and into the future. 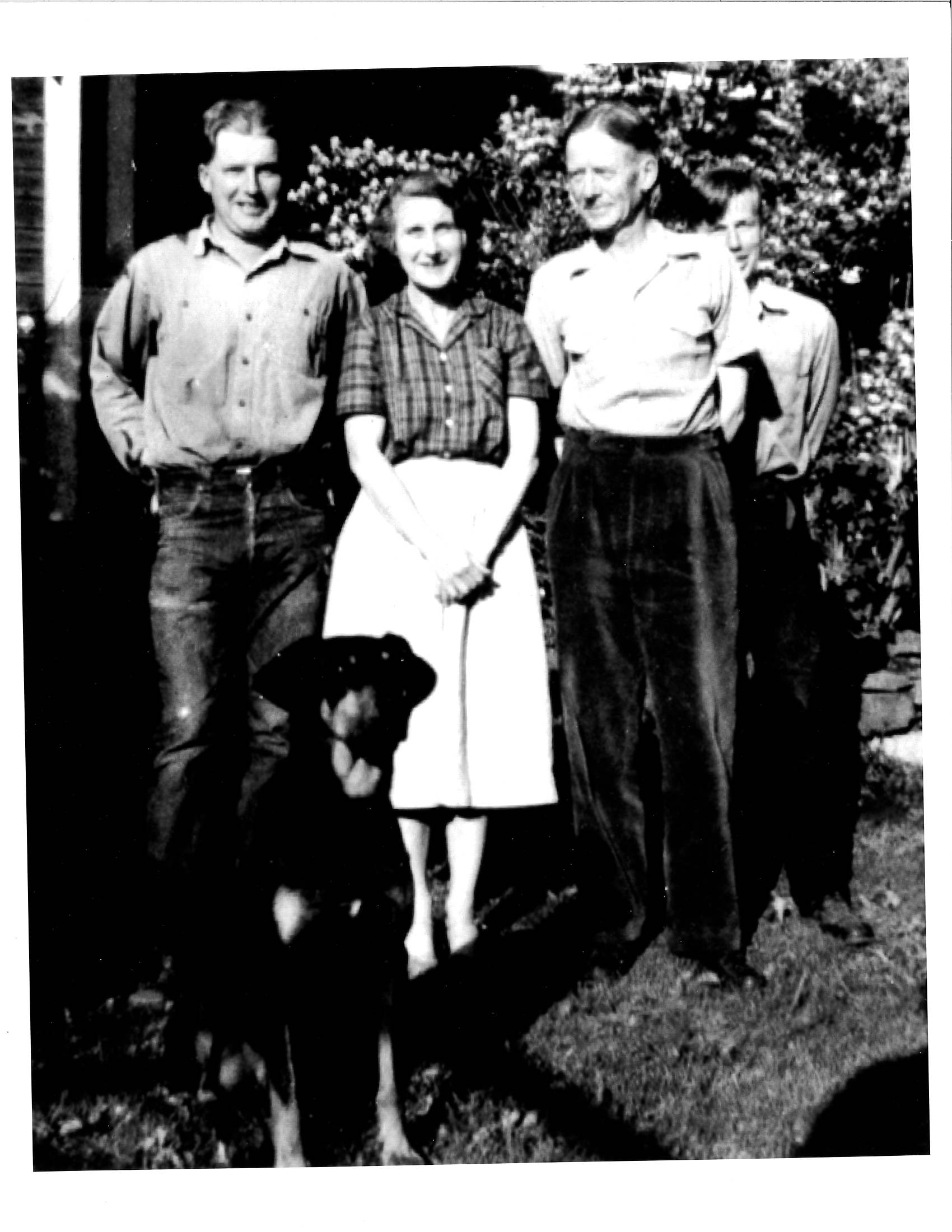