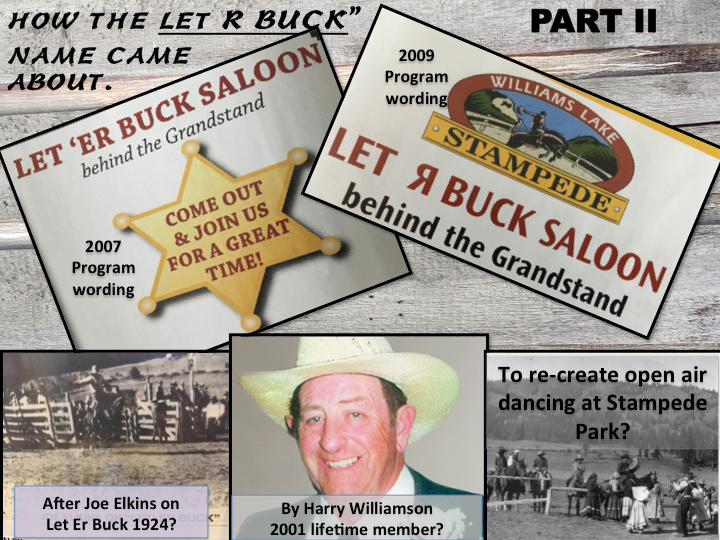 LET R BUCK Saloon Started out being called the “Beer Gardens.”
Director, Vince Hoffman was in charge of bringing in entertainment for the “Grandstand Show”. The arena tractor would pull the grandstand stage from the side of the racetrack into the arena for these performances. Over time it became too expensive, and was costing more money to put on these shows than was coming in. In 2001 the decision was made to stop the grandstand performances. The committee decided to take the portable stage and bring it all the way around to the back of the grand stands and set up smaller shows. (Harry) Williamson Paving donated the paving and a dance floor was created.
The idea of the open air “Beer Gardens” with entertainment was to go back to the early Stampede days when people danced in the open air during the stampede weekend.
Once Liquor laws allowed for the outdoor “Beer Garden,” a fence was built and admission charged for Saturday evening performances. It was called the “Beer Gardens” for the first few years until Harry Williamson came up with the name of LET ER BUCK, it is believed that he got the name from traveling to Pendleton Rodeo. He thought it would be a great idea to have a name for the Stampede Beer Gardens.
The first sign was a banner that was hung up each year. The Banner had the Spelling of LET ER BUCK on it.
Vince and his team provided Karaoke, and local talents during the day with bigger named bands to play 8 pm to closing. As the crowds grew larger and more evenings of dancing and entertainment were added; in 2007 the City of Williams Lake approved an expansion of the dance floor. The stage was moved back and Williamson Paving put in a larger dance floor.
Around 2008 or 2009 when it was decided to have a wooden sign made, Director Glen Thompson who owned Tell Tale Signs donated his time and supplies to design and complete a wooden sign. The wooden sign read LET R BUCK with no E in it and the Stampede programs started to show the new name of LET R BUCK with a backwards R around that same time.
A new stage was built in 2014 by Durfeld Log homes supplying the materials and logs. The new stage matched all of the log structures at Stampede Park.
Today Lorne Doerkson and Cindy Brady run the LET R BUCK Saloon, with Local talents during the day and bands in the evening for entertainment.
There is a heavy presence of Security and RCMP during the evenings of entertainment with safe rides home being offered by Adventure Charters and or use of the local taxi companies.

So how did the Let R Buck really get it’s name?
Was it after a horse called LET ER BUCK ridden by Joe Elkins in 1924? That would have been cool.
Was it named by Harry Williamson after travelling to The USA rodeos?
Was the LET R BUCK / Bear Garden created to provide that open air entertainment that the stampede had many years ago? Rain or shine the place is always full and rocking in the evenings.
You decide which of the two are correct. What we truly know is that the LET R BUCK Saloon, has become its own legend at the Williams Lake Stampede, with crowds filling the space each night of the rodeo starting on Thursday evening, building up Friday night and exploding at the seams on Saturday just like in the 1970’s at the old arena and the Squaw Hall in the earlier years.

Thank you to Lorie and Rick Rhodes, Vince Hoffman, The Museum of the Cariboo Chilcotin, and the Williamson family for taking the time to share your stories as volunteers working over the years for the Williams Lake Stampede and your adventures at the various Barn Dance locations, and LET R BUCK Saloon.